Valorant has gone from being virtually unheard of to positively dominating the gaming scene. This would be incredible for any game, and Valorant is still closed beta! For those of you that are lucky enough to have access, or just want a head start for when it is finally released, this article will give a breakdown of each gun category in Valorant, and will give the verdict of the best guns in Valorant. 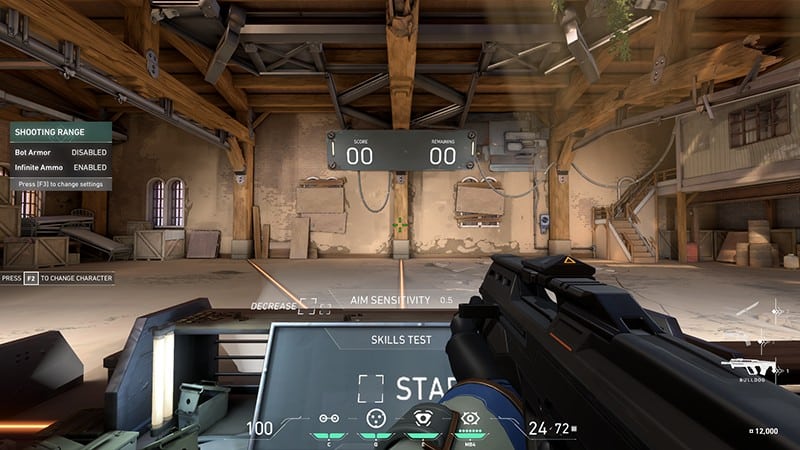 This Assault rifle costs 2,100 credits, and is very average in mag size (23), recoil, and fire rate (9.15 per second). It’s most notable quirk is that it switches to a 3 round burst mode when you are aiming down sight; something which is sure to turn some players off. Unfortunately, the gun’s relatively low price is reflected strongly in it’s damage output. It’ll do 35 points of damage to the body, which pales in comparison to the Guardian’’s 65. 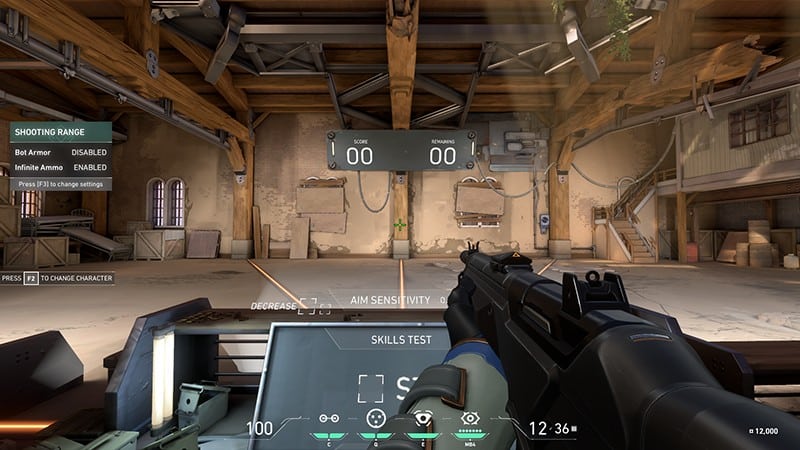 The guardian costs 2,700 credits and offers a high damage, low fire rate (6.5 per second) choice. It is semi-automatic, and has a slightly higher zoom than the other rifles when aiming, making it adept at longer ranges. The most impressive aspect of this weapon is its damage; a well placed headshot will deal 195 damage and kill at any range, even if your opponent has armor. It has easy to handle recoil, too.

This gun costs 2,900 credits. It has the highest rate of fire out of any rifle at 11 per second, and a large magazine of 30 to go with it. The most important thing to note is that it is the only rifle which has damage dropoff at longer range. This means that, within 15 metres, it has the highest DPS (damage per second). Unfortunately at any range further than 15 meters, it becomes much less competitive. 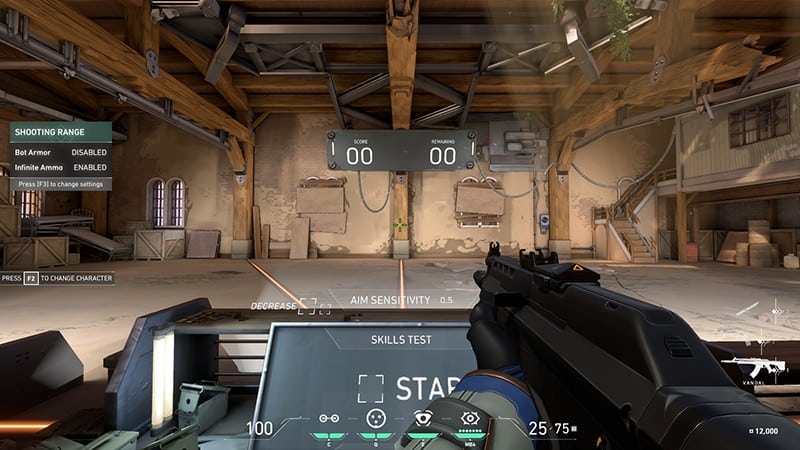 The Vandal can be described as a happy medium in most respects. It is fully automatic and has a lower rate of fire than the Phantom (9.25 per second), but makes up for this by having no damage dropoff at all. It also has a fairly controllable recoil pattern, meaning that it’s competent at all ranges. This fact is accentuated due to the Vandal’s damage, which is high enough to kill in any situation with a single headshot (156 damage). In addition to this, it doesn’t cost any more than the Phantom, coming in at 2,900 credits also.

Overall, it is hard to argue against the Vandal’s ability to be competitive at any range, in any situation. It’s DPS is only slightly lower than the Phantom’s at close range, and it’s ability to kill in one shot at any range arguably makes it almost equal to the Guardian at longer distances. 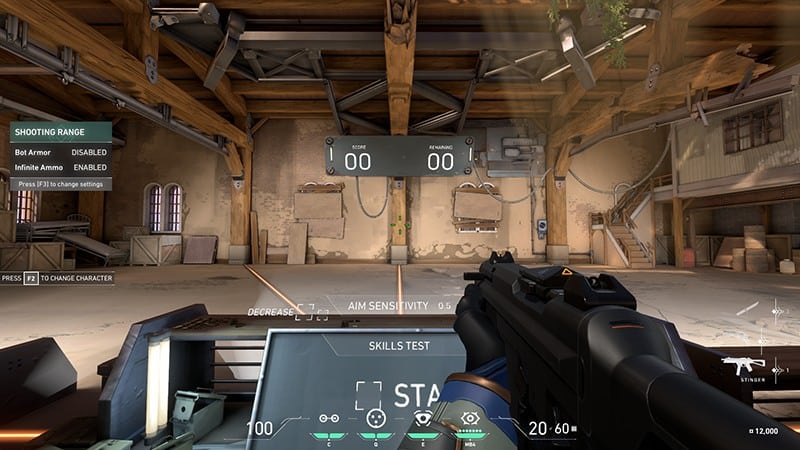 This SMG has the highest rate of fire in the game at 18 shots per second , but is thoroughly uncontrollable because of this. While it is very cheap, coming in at 1,000 credits, it has notably low damage to counteract this. With headshots at close range, it’ll take a minimum of 3 bullets to kill an armored opponent. While you are aiming down sights, the Spectre changes to a four round burst mode, however this isn’t very useful due to the low damage. 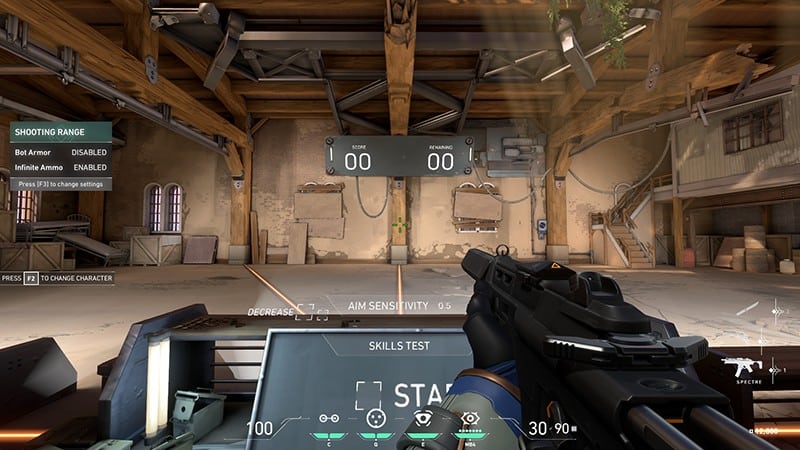 The Spectre will set you back 1,600 credits, and is great for close range combat. It will dispatch any opponent with just 2 head shots at close range, which is great when you consider it’s high fire rate of 13.33. This gun also boasts controllable recoil, and a fantastic mag size of 30. It’s biggest downfall is it’s low body damage; at any distance over 20 metres, it’ll take a minimum of 5 bodyshots to kill.

Despite the Spectre’s cost, the headshot damage is enough to make some differences you can’t ignore. If your opponent is at long range and armored, it’ll take 2 bullets instead of 3 with the Stinger, and while the Spectre does lower damage to the body, this isn’t as important as the headshot stats. In addition to this, the Spectre doesn’t change to burst mode when you aim, which most players tend to prefer. 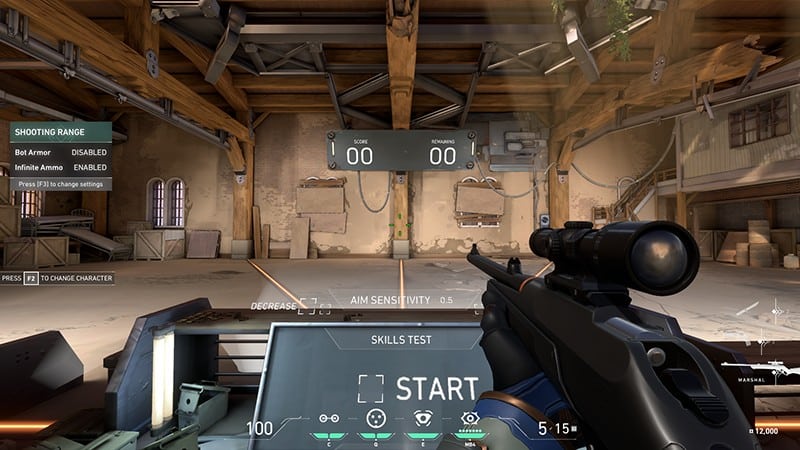 The Marshall is cheap, coming in at 1,100 credits, and it’ll kill any opponent with a headshot at any range. It also will kill an unarmored enemy at any range with a bodyshot, perhaps making it a great early game option. It also has a far higher rate of fire (1.2 shots per second) than the other sniper, and is semi-automatic too, meaning you can keep aimed between shots. It’s hard to fault the Marshall when you take its price into account. 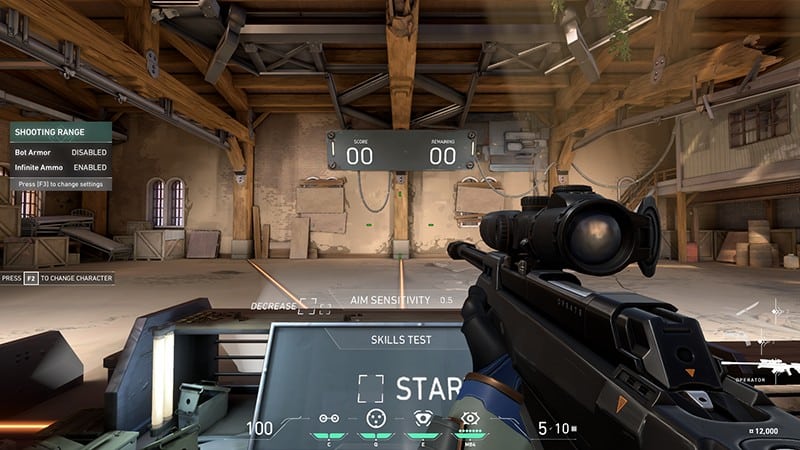 This weapon has the highest damage in the game by a significant amount (255 with a headshot), bar the shotguns. Because of this, it’ll kill any armored target, at any range, whether you hit the body or the head. It also gives an impressive 5x zoom when aiming down sights. These two aspects together make it clearly the best choice for long range engagements. It’s only downside is the slow rate of fire (0.75), and it’s high price of 4,500 credits.

The sheer damage output of the Operator, and it’s ability to deliver a one-shot kill to the body in any situation make it the best pick of the two snipers. However It is worth noting that, if you have a strong preference for using snipers, the Marshall can be a great choice in the early game to help you work towards purchasing the Operator. 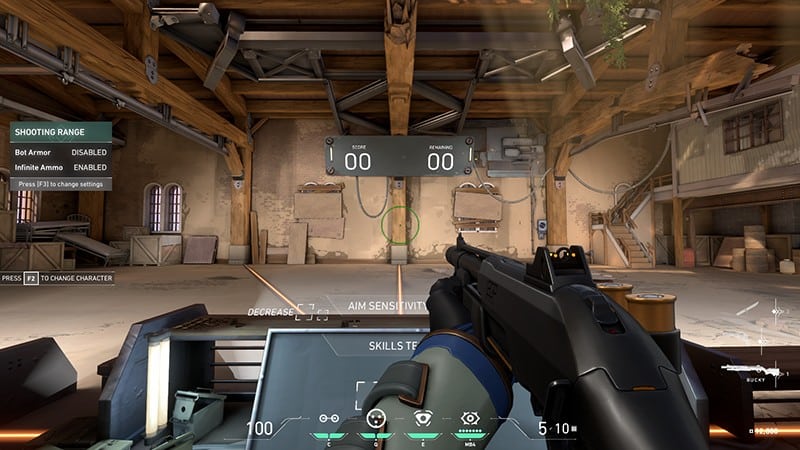 The Bucky costs only 900 credits, making it the cheapest non-sidearm weapon in Valorant. It also has devastatingly high damage; enough to kill multiple players with one shot if they are bunched together tightly (660 damage is technically possible, although this is incredibly improbable). However, It can only fire roughly once every second, and the damage dropoff is significant after just 8 metres, giving it some obvious flaws. If you have multiple enemies nearby simultaneously, it’s rather unlikely that you’ll have a chance at survival. 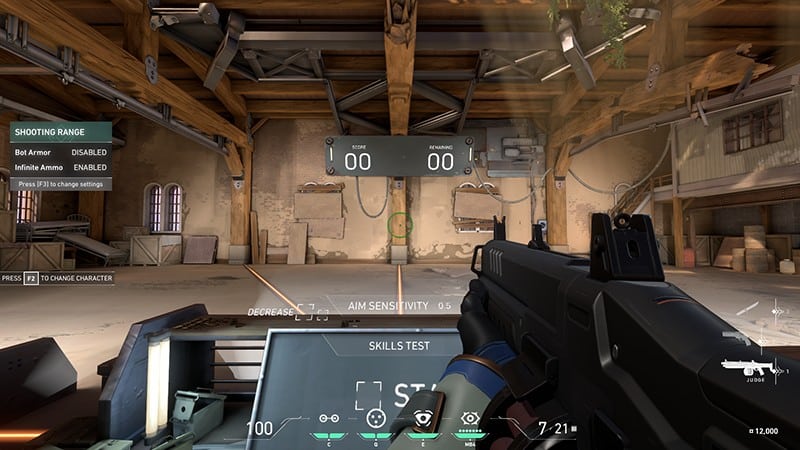 The Judge is a fully automatic shotgun that can fire about 3 times a second. Sadly, the damage is extremely low, and makes the gun ineffective in most situations. Even at point blank, it will take 2, potentially 3 shots to finish just a single target. The damage dropoff and recoil are significant too, meaning that it is almost entirely useless at ranges of higher than 10 metres. Given that the price is 1,500 credits, you might be better off saving another 100 credits for a Spectre.

Shotguns are currently rarely seen in Valorant, and there seems to be good reason for this. If you are set on using one, go with the Bucky, as it can be great for quickly dealing with single targets in close quarters. 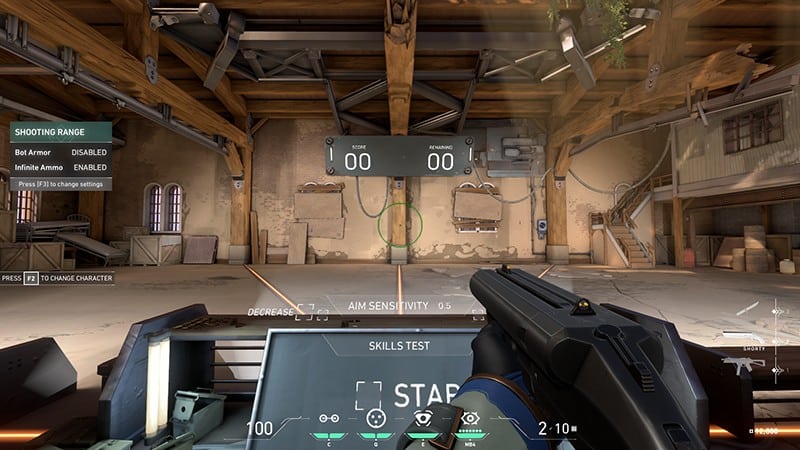 At 200 credits, the Shorty is the cheapest weapon in Valorant. It’s a compact double barrelled shotgun, so although it does only have a mag size of 2, the second shot can follow up the first in about a third of a second. The damage is really low, only dealing 12 points per pellet to the body at point blank, so even if both shots connect well, there’s a chance it won’t kill an armored opponent. This means that the Shorty’s only real use is finishing off injured enemies. 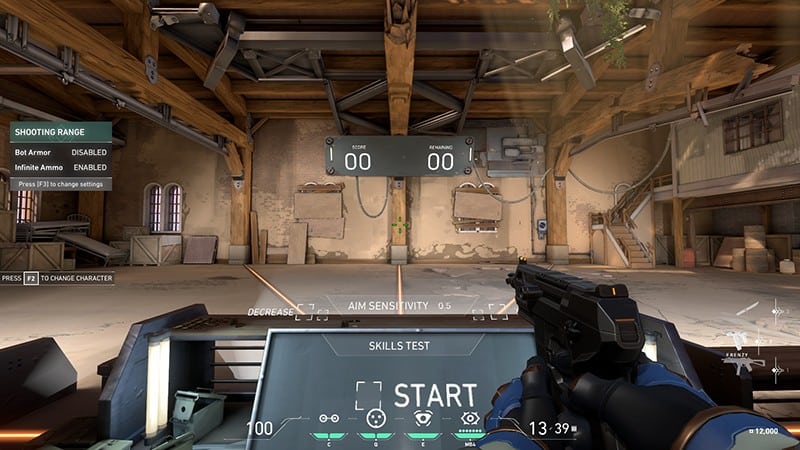 This is the only fully automatic sidearm in the game, and it costs 400 credits. The small magazine of 13 immediately poses a problem: with a high fire rate of 10 per second, you will be empty after just 1.3 seconds. It also has one of the most challenging recoil patterns in the game, making getting headshots a real issue. Given that it takes at least 4 bodyshots to kill, it might be best forgetting the Frenzy. 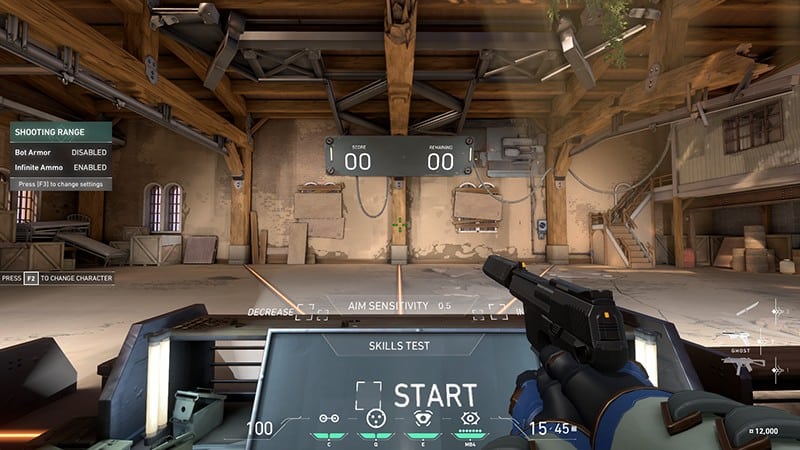 The Ghost is a massively upgraded version of the Classic (the starting gun), and it represents a fantastic option for the early game, with a price of 500 credits. A headshot will kill an unarmoured target in a single shot up to 30 metres, which is seriously dangerous when you can shoot almost 7 rounds in a second. It has a large magazine of 15, too, making it a superb all-rounder. 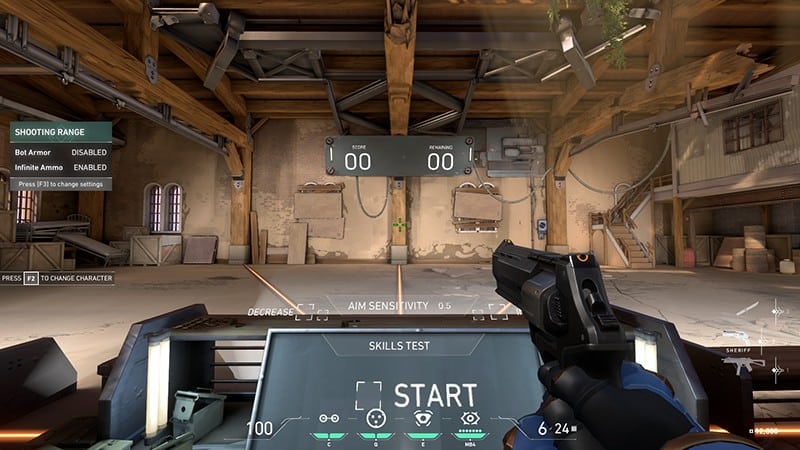 The sheriff has a slower fire rate than the other pistols (4 per second), and has a mag size of only 6. In addition to this, it has the most expensive sidearm (800 credits), and has a more unpredictable recoil pattern than them too. It attempts to make up for these shortcomings with impressive damage: it’ll kill in a single shot to the head, or three to the body, even if your opponent has armor.

In general, the Ghost is the best choice out of the sidearms. It balances damage with handling perfectly, and is very affordable early on in the game too. While the Sherriff’s high damage might be alluring, it is usually wasted, as most targets won’t be armored at the start of a match. 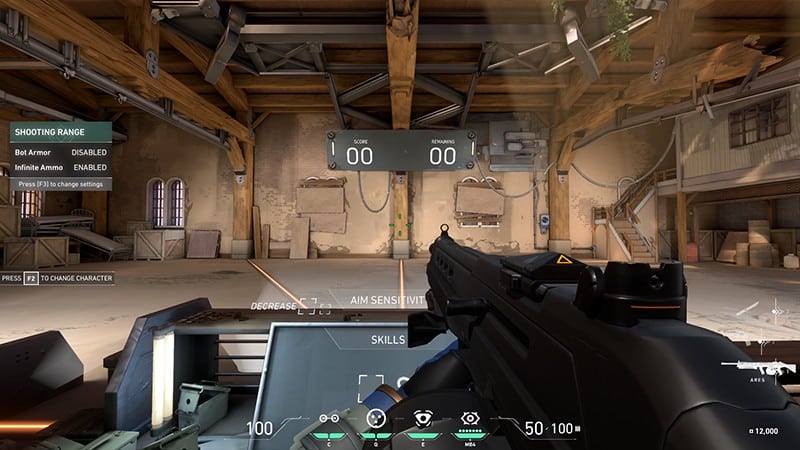 The Ares is quite cheap, with a price tag of 1,700 credits, but this is reflected in its mediocre stats. It has a rate of fire of 13 shots per second, which is decent, but does not make up for its terrible damage. It’ll take you three headshots to kill a target at any range, and the tricky recoil pattern will make it tough to get any at all. 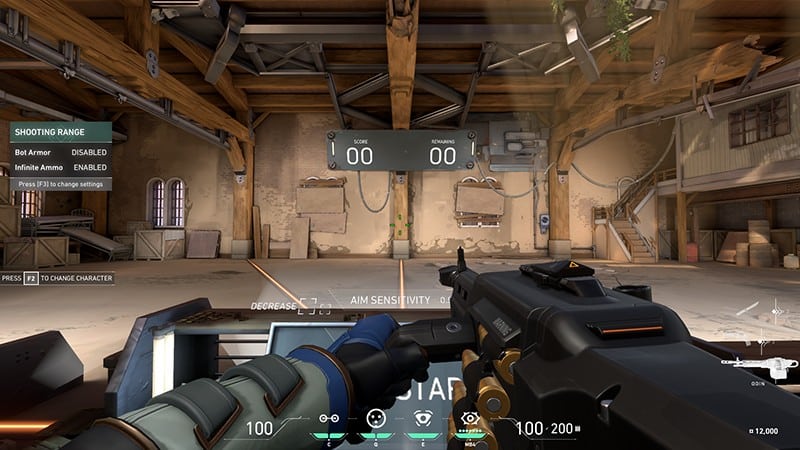 This weapon surpasses the Ares in every stat, which it should considering its high price of 3,200 credits. Most impressively, it has a magazine size of 100, which, when paired with its eye watering 15.6 shots per second, can make you a very authoritative player. The damage isn’t too bad either, allowing you to deal with any enemy in 2 headshots, or 4/5 bodyshots.

By default, the Odin is the better of the two machine guns in Valorant. However, it should be pretty plain to see that there are better options in the price range of both of them. Your credits are best spent on a Spectre or a Vandal.

There you have it. Now you’ve read this article, you’ll hopefully be selecting your weapons in Valorant with confidence. The game is in beta, and there will likely be many changes to most of the guns in this game. So, be sure to stay tuned!

This site uses Akismet to reduce spam. Learn how your comment data is processed.

PrevPreviousHow To Enter The Practice Range In Valorant
NextBest Crosshair Settings In ValorantNext
Menu
Menu
Write For Us!

Love Valorant?  Want to write about the game?  We want you!  Please get in touch via the contact page!